On the behaviour of deviant communities in online social networks

Abstract. On-line social networks are complex ensembles of inter-linked communities that interact on diﬀerent topics. Some communities are characterized by what are usually referred to as deviant behaviors, conducts that are commonly considered inappropriate with respect to the society’s norms or moral standards. Eating disorders, drug use, and adult content consumption are just a few examples. We refer to such communities as deviant networks. It is commonly believed that such deviant networks are niche, isolated social groups, whose activity is well separated from the mainstream social-media life. According to this assumption, research studies have mostly considered them in isolation. In this work we focused on adult content consumption networks, which are common in most of the on-line social media networks and in the Web in general. We found that only a small group of densely connected nodes are responsible for most of the content production and that they have a clear internal structure. Diﬀerently from previous works, we also studied how such community interacts with the whole social network. We found that the produced content ﬂows to the rest of the network mostly directly or through bridge-communities, reaching at least 450 times more users. We also show that a large fraction of the users can be inadvertently exposed to such content through indirect links. We discuss a demographic analysis of the producers and consumers networks. Finally, we show that it is easily possible to identify a few core users to radically uproot the diﬀusion process. We aim at setting the basis to study deviant communities in context. 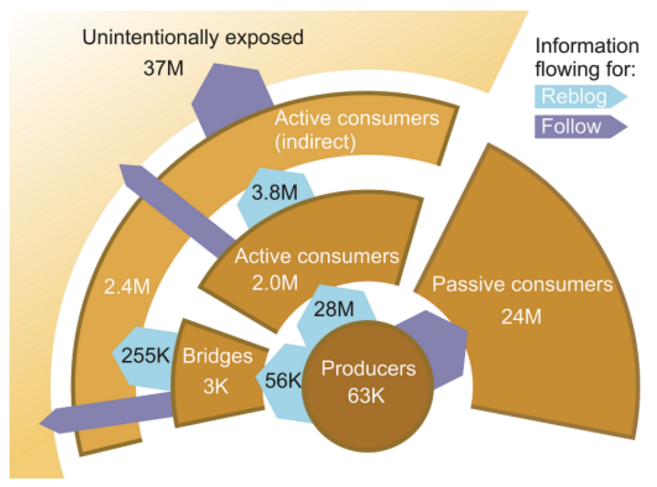 The post-print is available here.